Just a bit of background: This hall has 6 courts.  At one stage some enthusiasm was mustered towards the building of another 5 courts.

Unfortunately, funding did not quite meet the expected cost, so the idea was shelved, and the funds raised were put in an account, not to be touched, to await the day when it may be possible to raise enough capital to make it happen.

As a player at the hall (The Papakura Ladies Day Badminton Club, yes, I know but they allow men to play!), I was talking to someone and somehow this idea came up: Why not use the money to have a partial add-on?

The ideas mentioned were a kids area, a proper commercial kitchen, a seating area and the ability to watch games from a different angle.

The whole idea of these plans is as a starting point. 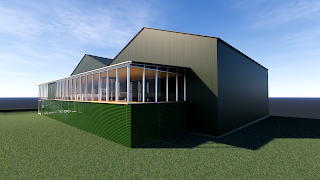 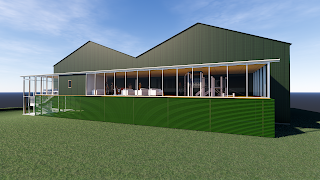 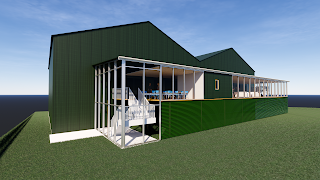 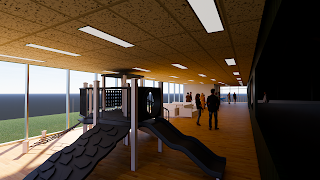 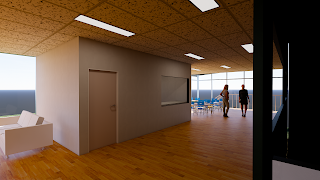 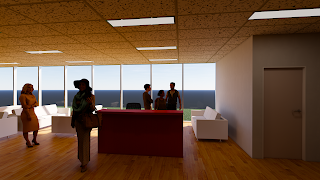 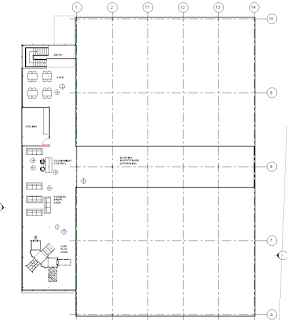 Posted by William Le Couteur at 12:07 AM No comments:

I have posted a video on Youtube on these, found at:

There will be some who say: "Just so bleedin' obvious, why post about this?"

But there will be some who say that they have tried to mess with the True North business,  but were put off by the usual unusual way of Revit!

I was one of these, but now I realize my fears on this were unfounded.

On trying it out for the first time, my impression was that all my drawing from then on would be on a slant.  Which would be true, if you did not change the view properties back to Project North.

In hindsight, it is a nicely arranged system.  You have two options for a View Orientation, True North and Project North.

As you start a project, both Norths are set pointing up the page.

For ordinary drawing you can leave them like that, no problems.

The fun only begins when  you wish to use say Enscape to do a rendering.  Enscape checks out where your North is, and positions it's sun accordingly.

By the way if you have not tried out Enscape yet, give it a try, an amazing piece of software.  Just make sure you have an Nvidia P2000 to make it run though (cost NZ$800 or so)

To alter your project north just click on Manage and find the button to adjust True North.  A bit of strangeness here: you have to pick where the north is first and then turn the pointer to where it will be. Feels unintuitive, but that is probably just me!

To go back to normal viewing of your plan view, just set your Orientation back to Project North.

I had a job recently where the client wanted some hedging out front, so I was able to make a fairly rough effort by using a wall and making it's material a piece of seamless hedge image, which I found really quickly on the internet.  It might have been even nicer if a finer image had been chosen, this one is 215x215. 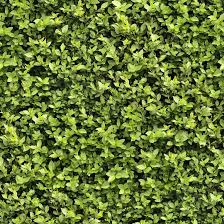 Another better approach might have been to us a mass, and round  its edges slightly.  By this time I was in "I am over this stuff", attitude, never good, because it is always the tiny little bit of extra entourage or effort that result in a better job.

This is how the job ended up, a quadriplex, trying to get it approved by town planners:
(Notice the hedge at the front) 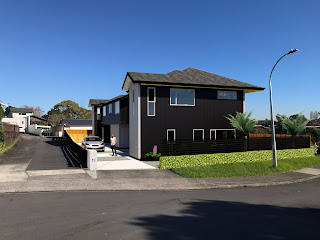 Posted by William Le Couteur at 5:42 PM No comments:

Massing, and getting two beam systems to live nicely together

Recently, in fact the house that featured in the last post, I needed to put a picture frame around two windows. 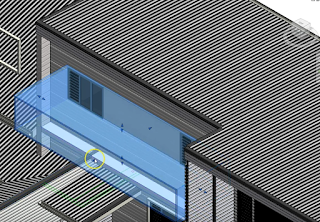 Easy, you say, just draw a mass object and job done.  Well maybe not for me!  I think I may have had 3D snapping on, and this caused a lot of pain and woe.

It seems Autocad is a shovel. You can see it, you know what it does, and it is straightforward.
Revit on the other hand is like a magic black box.  You poke it and hope something comes out.

You just have to know it's little ways, which in my case is taking years to find out.

Mind you it could be me. I spent years learning Autocad.  Then at work a person who had never used Autocad got a job in our office. She knew Archicad, and maybe had a quick lesson or two on Autocad at Drafting School, but just came in, sat down and away she went. No questions, just hit the ground running.

I was amazed, this should never happen!

Anyway, with the mass thing I eventually cracked it and put a youtube video up which describes my way of doing it.

I have since found that you can use "generic models" for this sort of thing, and they might be a bit more versatile.

Here is the link: https://www.youtube.com/watch?v=le60u8EUx1M

In this case I was having the decking, made out of a beam system, to sit on top of a set of joists, also a beam system. 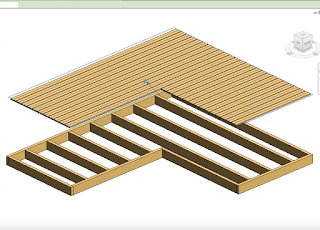 Silly me. I found that the minute you put them together, bad things happen!

After much puzzlement, wailing and gnashing of teeth, I found a work around:

Put one beam system on one level and the other on another level, then offset the top one down so it seems to sit on the lower one.

I did make an error in the video, not a big one, but with the 92mm plank I tried to align it with the deck edge, but my first pick should have been the deck edge. Maybe this is just me, but I find this sequence even now, unintuitive.

My Youtube video showing this is at: https://www.youtube.com/watch?v=ZctXYJsyCH4
Posted by William Le Couteur at 1:13 AM No comments:

Recently I had a request from a friend to do a house render.  Unfortunately this one was a "free" job.
As usual, it was like dragging a cat backwards through a gorse bush.  New Revit learning stuff had to go on, mostly in the area of screens, where I found out the best way was to use a curtain wall as the best way to create these.

Another pain in the butt was the fascias, which had to be shiplap.  If they were to be horizontal, then no worries, just make a wall.  But this roof is at 3 degrees, so what to do?

Several brain overloads later, I realised you could use the fascia tool to achieve this.  Just a small matter of organising a profile, and having a fascia that used that profile.  Looks vaguely related to the wall cladding, which is the same stuff.

First is my try with 3DSMax 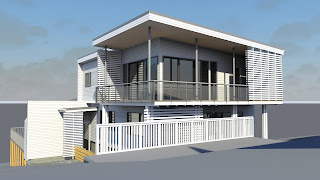 This one was done using Enscape 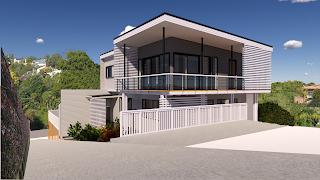 Posted by William Le Couteur at 8:16 PM No comments:

Just coming up for air here, after frantically entering into lots of competitions on Freelancer.

Not a lot of luck as yet, as it seems more talented persons enter into these

I am hoping that some of them might get too busy to enter or they will judge that the amount of effort is not worth it.  This seems to be the case for a currently offered mall design. There were several calls to the contest holder to increase the prize, as he wanted multiple rendered views, along with about 20 shops that were supposed to be stocked with goods.

Well, good luck trying to stock 20 shops. Obvious work-arounds were to get pics of shop walls and use them as materials on the walls, which is what I did.  I just ran out of pics to use (most pics of merchandising are never straight on, always perspective). Not to mention patience.

I did a check render using Revit and 3dsMax on really low settings and watched the result dribble onto the screen. While the lighting came out not too bad, the amount of time to get a good looking render, probably in the region of 2 hours minimum,  which was just not competitive with Enscape, where I found that if you set capture output to 4K, you get a very sharp image in around 1 minute per shot. Then there is the ease of navigating to your next shot.  Magical.

Finding the right materials is always a trick, I downloaded a pic of the Texas flag and used it on the columns, maybe a bit garish. The floor was a download as well. 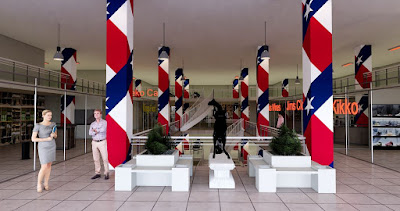 This competition is still running, and sealed.  I guess sealed is so people do not copy each other.
Speaking of which, it appears this site gets around 50 page views per month. What is deceptive about this figure is that it covers all the posts, and does not say if they read it or not.  So to the two persons reading this, "Hello!"

The next one entered was a pair of townhouses in Australia.  Given the brief, I found it almost uncanny how the creation of the floor plan generated on it's own the "architecture".  Which is to say that very little "architectural" design was involved.  Maybe that is why it did not win. 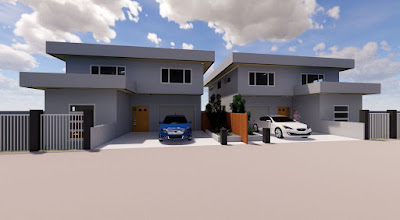 Posted by William Le Couteur at 3:25 PM No comments:

First, a man who wants some spikes for the top of a swimming pool wall: 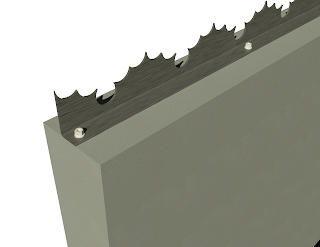 Next, a house in the Netherlands, I made two options as my daughter gave one of them the thumbs down: 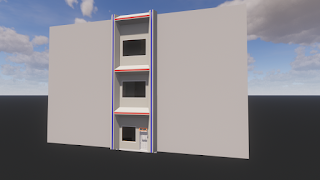 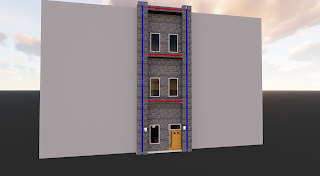 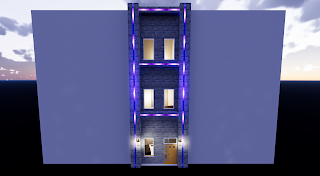 In this last one I put in the lighting.
Finally, a tiny apartment: 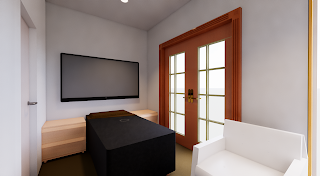 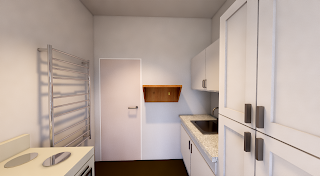 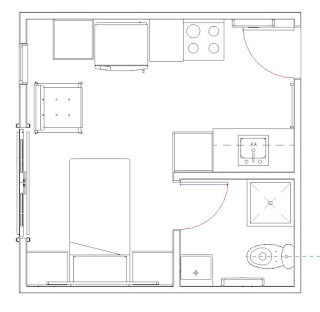 All of the above used Revit with the Enscape add-on (except for the plan view).
Many more pics were done, you can find them on Contests, at
https://www.freelancer.co.nz/

As usual, Revit city is a good place to go to get components, but as time is short, things like nice beds, chairs and radiators seem hard to find.  Just need more time?

Posted by William Le Couteur at 1:00 AM No comments:

Well, after getting my GTX1060 home,  I started on my quest to upgrade my power supply on my aging HP Z230.  Hmm. It appears no such animal can be found in NZ!

But wait, there's more! On checking what is needed it appears it needs a 6 pin extra power supply.

A quick look inside reveals no such plug available.  Eek!

Oh boy. Another trek back to Pbtech and another $200 to belong to the P2000 club, a certified but lesser card than the GTX1060.

Whoopee! Get this baby home and suddenly realise it was the ADAPTOR all along that was the problem.  (Simple, just plug it in and see if it works on the other one).

So a lesson here guys....don't ASSUME as it usually makes an ASS out of you and ME!

Having said all that it seems my logic was not all that bad, I mean, who would have thought a simple adaptor would go bad?

Humble grovelling apologies to Nvidia and all the cards who sail in her.

William Le Couteur
I live in Auckland, New Zealand. I am an architectural draftsman, one who will retire soon! My interests are programming, rendering and badminton. I once was a contract mechanical draftsman.